April 27, 2013
The pond in question is private golf course water. Well manicured. Shallow. Rarely fished. It holds decent bass, slab crappie and the requisite 10 million bluegills. I'm interested only because it also holds enormous grass carp. Tough SOB's. The banks slope down to the gin-clear water on every side so that no matter where you stand, you are usually well above them. They see you coming from a mile away. The ones feeding near the bank - don't even bother. You don't have a shot. Look for the ones cruising twenty, maybe thirty, feet out. Even then you better be on your knees, side-arm casting, the tip of the rod sweeping just above the thick grass of the rough. This photo of Barnsley Gardens Resort is courtesy of TripAdvisor

Fishing here, you'll crouch more than you stand. You'll crawl more than you walk. You'll lay flat if you need to and hope that hump you feel pressing against your belly isn't a mound of fire ants. It's not unusual to carry on this way for an entire session and never make a cast, which is in no way unfamiliar or strange to carp anglers. We do that sort of thing all the time.  But I'm sure it looks pretty darn odd to the folks dining on the porch of the restaurant that overlooks the pond. I often wonder what they're thinking as they watch me, alternately kneeling and crouching, skulking my way around the perimeter, carrying a fly rod but never casting. I know what I would think, and I always feel a little bit sheepish, silly even, stalking these grassies with a gallery of people watching.

So that was the scene a few days ago. The glasses and silverware clinked above me.  Loud conversations and laughter rang out from the porch.  I stalked.  Every fish tailing near the edge blew up as usual but I considered this inconsequential as I had my eye on a cruiser. I couldn't see him, but I could see his wake. It was somewhat mesmerizing, watching this obviously large fish pushing an impressive bulge of water has he made his rounds. I thought about just watching him for awhile. But the truth was that I was there to do this and had fly rod in hand.  Not venturing even one cast would be, well, kind of stupid.

The cast was pretty good if I do say so myself and the fly struck the water about a foot in front of the wake, which disappeared. I figured one of two scenarios played out here - either he spooked when the fly hit and sounded, or he slowed to take it. I guessed the latter gave a small strip. The water exploded. He had eaten and, feeling the sting of the hook, proceeded to rip the pond apart with aggressive reel-smoking runs and violent rolls on the surface. It was an impressive show and he gave a good accounting of himself. 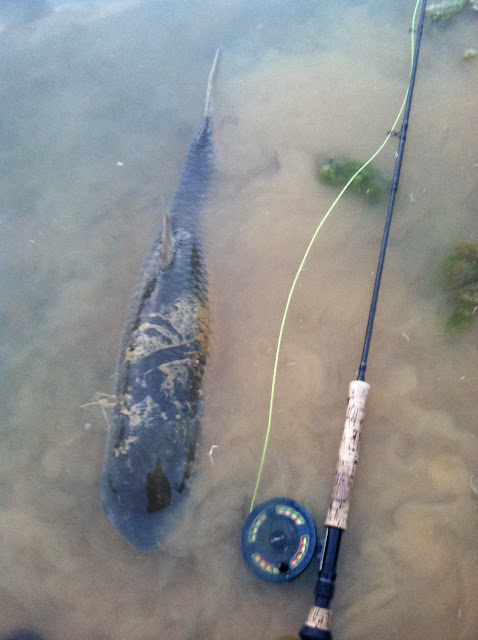 Despite his efforts, I was confident. Strong 1X leader, solid knot, good set - all of those things were in play and I knew the issue was not in doubt. After several minutes I landed him, snapped a couple of quick photos and eased him back out toward deeper water where he disappeared with slow beats of that big paddle tail.

That's when I noticed the porch. Complete silence. No glasses clinking. No talking. Nothing. I could feel the stares and knew what I had to do. I clipped the fly off the leader and reeled up. I casually dried my hands off on the towel that I carry, doing my best to give off a nonchalant and cool vibe -

"That's right folks, I do this all the time. No big deal. Don't try this at home, I am a professional."

Then I sauntered s-l-o-w-l-y down the cart path toward my car, even pausing a couple of times to gaze out over the water.

Then when I reached the parking lot, out of sight of the porch, it was: 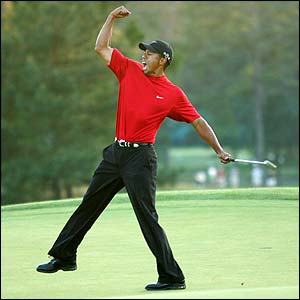 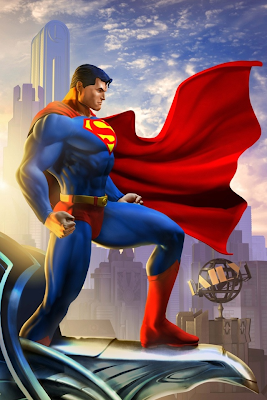 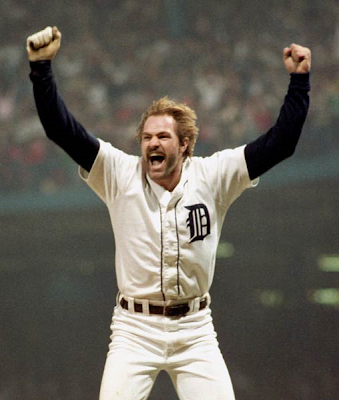