July 29, 2013
This being a carp-centric blog, I feel compelled to post at least some carp related content occasionally. 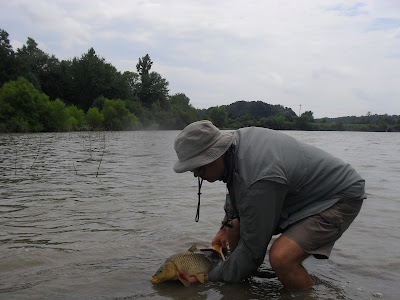 The carping has actually been pretty good as of late. By "good", I mean the carp are on the flats in decent numbers and some of them can be caught. They are no push-overs by any stretch.

A #6 MF'er and a nine foot leader will not get it done. The leader must be at least 12 feet and the fly no bigger than a #10. A twenty foot cast is better than a thirty foot cast and dapping is best of all if you can get it. You will do everything right and still get your hat handed to you. But you will catch a few and every fish in the net is a kind of victory. 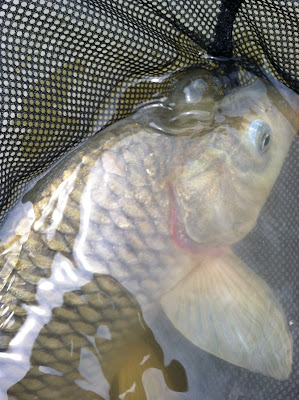 Carp aside, highlights of this trip were a bald eagle and an osprey. The eagle was just a passerby and flew over with nary a glance. The osprey, though, put on a heck of a show. Either he was a young bird practicing his fishing technique, or he was just out having some fun. I anchored the boat and watched him for awhile.

If you've never seen an osprey out fishing for his dinner then definitely check out the video link at the end of this post. An osprey will circle lazily, then suddenly fold its wings back and drop straight to the water. The landing is violent and pretty darn impressive. The bird I watched never came up with a fish, which I thought was odd since I've seen ospreys do this before and they rarely miss. So it occurred to me that maybe he was just out there for the sheer hell of it. Just because it was fun. Anyway, he dove over and over, dropping out of the sky like an F-15 and absolutely detonating on the water.

at the cinema Carp Georgia not Memphis