Those Orvis fellers are ok by me. 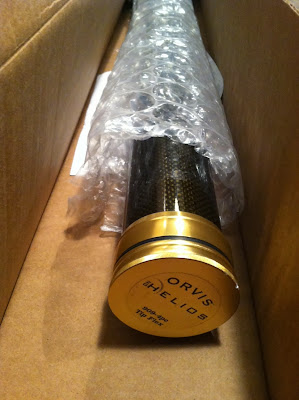 A Gheenoe, a tree, and a bass popper entangled in the branches of said tree is apparently a lethal combination for fly rods. Let me state for the record that I was seated in the front of the Gheenoe and not involved with the demise of the rod. My fishing partner, who I will not name here for fear of embarrassing him publicly - let's just call him Max, inflicted the wound on my 9 wt. Helios as he was wrestling the branches trying to retrieve his popper. We're still not sure how it happened. The rod was laying unused in the back of the boat minding its own business at the time.

In any case I ended up with a broken 9 wt. For those counting at home, that's the sixth time I've broken this rod in the past ten years. Four of those breakages have occurred in the past two years. When I called Orvis to get my repair number this time, the nice lady said "What? Again??".

Ok, not really, but I half expected that to be her response. I'm frankly surprised Orvis keeps sending out new replacement gear to such an obvious klutz as myself.  I figure at some point they'll just mail me a check instead of a new rod and tell me to go buy a Sage or something.

So, many props to Orvis. I sent this rod to them two weeks ago and yesterday a replacement was sitting on my front porch. Two weeks.

Thanks guys. I'll try to be more careful.
dang it Nine Weight Nelly