November 30, 2013
McTage of Fly Carpin' recently queried fellow carpers about preferred dry flies.  I had little to offer in that regard because my own record with carp on dries is, um, unimpressive.

That's not to say I haven't had my chances. I've had carp rise to dry flies, but have never been able to seal the deal. One outing in particular last year featured several cloopers rising repeatedly to an Elk Hair Caddis, yet I couldn't manage a single hook-up. At the time I came to the conclusion that carp have a tough time with buoyant flies because of the inferior position of their mouths. When a carp attempted to eat the EHC, the fly partially entered its mouth on a cushion of water and then was pushed right back out on that same cushion when the fish chomped down. Carp mouths are after all designed for Hoovering food up from the bottom, not sipping items sitting high on the surface.

However, there was another card in play that day - a Hare's Ear nymph dropped from the EHC. Dan Frasier suggested in the post comments that the dropper was possibly the problem here. His theory was that the dropper line kept the dry from fully entering the carp's mouth and prevented the take. This made a lot of sense and after thinking this scenario through I figured he was probably right.  I dropped the buoyancy idea.

﻿
Fast forward to yesterday. I found a small pod of cloopers, ironically enough in the same place that I discovered them on that previous outing. I again tied on the EHC but, remembering Dan's comments, decided to forgo the dropper. It was deja vu all over again. The fish rose. The fly partially entered the gaping mouth. The fly came out as the mouth closed. Several of the fish backed off and appeared to be genuinely puzzled that they didn't end up with a mouthful of foody goodness. Most of them then eyed the fly carefully, apparently lining it up dead center, and tried again. After two or three attempts they gave up and moved on. Very interesting to watch this play out again and again. These dudes wanted to eat that fly but just could not make it happen.

With no dropper to get in the way this time, I started thinking about the buoyancy deal again. The EHC rides high on the film and I suspect this is why these carp had trouble. The cushion of water was a buffer between the hook and the carp. They never came into contact.  I figured I needed a fly that sat in or below the film and maybe even sank a bit as it entered the carp's mouth. A fly that was buoyant, but not too buoyant.

So I clipped the EHC and tied on a Parachute Adams, a dry that sits solidly in the film.  My cloopers were still hanging around and I put the PA on one. My cast was actually off the mark and the fly landed a foot or so to his side. But he saw it, casually easing over to slurp it in. The fly slipped inside those rubber lips and disappeared. Bam. Carp on a dry fly. High-fives all around, which was awkward since I was fishing alone. 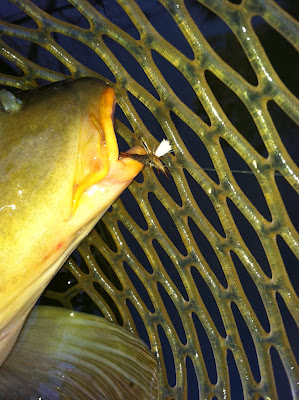 In short, I'm beginning to think that one thing deserving serious consideration with carp and dry flies is the buoyancy factor. I wonder if the most effective dry flies for carp sit low in the film rather than float high like, say, a Catskill-style dry or an EHC.  I think the hook point needs to be well inside that cushion of water in order to hit paydirt.

Granted, there are plenty of anglers who catch cloopers on flies like the EHC, so buoyancy is not the end-all and be-all here, but I think it's a card that is sometimes on the table. In any case, I'll be carrying a healthy selection of Parachute Adams' in my carp box going forward.
Carp cloopers fly stuff