But the other truth here is that fishing a marina for regularly fed carp is bush league. I'm surprised the guys over at 3 Rivers Anglers allow it. Their Carp Cup is otherwise an excellent tournament. Well-organized and a hell of a lot of fun.

But marinas are in play, which means that you can park your boat in a spot where carp are fed more or less daily by local yard-apes (read: kids) and cast a fly to some pretty easy marks carp-wise. And that's exactly what this year's tournament winners did. From what I understand this is their strategy every year.  It should be noted that they've won every time. This year it was Duncan's Marina: 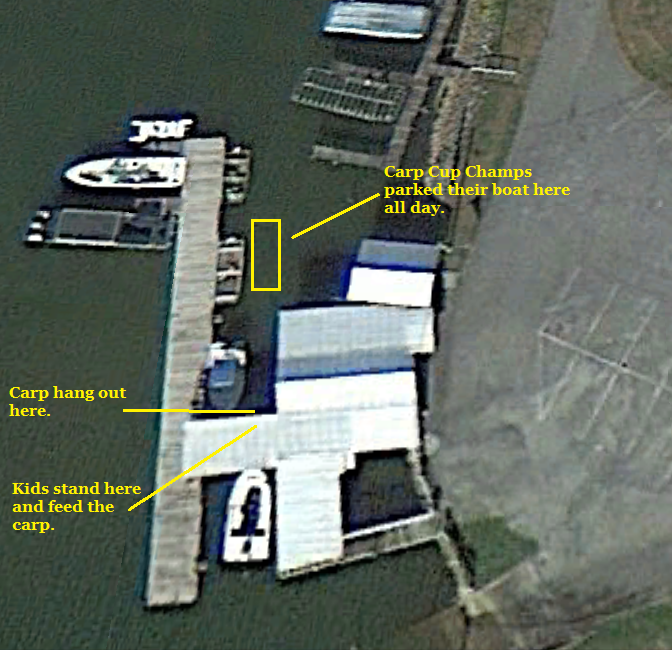 At last year's Cup we were told that we would have to hit the marinas to have any shot at winning. And so we did that, fishing a mix of marinas and flats. We did catch a couple of carp at the marinas and I can tell you that it was unsatisfying more than somewhat.  Embarrassing even. I was hesitant to admit to the other anglers where we caught our fish.

So this year we had a different game plan and stayed on the flats. We focused on a small area and circled through a series of flats and wooded shorelines. This was successful and we'll definitely have a similar strategy in 2015.

There may not be a next year for us. There's no use in spending several hundred dollars in entry fees, beer, gas, beer, food, beer, etc. to fish a tournament with a skewed playing field. Yes, I know we could just go lay up at the nearest marina and pound the docks if we truly wanted to make a run at winning the thing.

But really, no thanks.

I think it can be easily argued that the entire carp angling niche is largely grounded on one central fact -  carp are tough SOBs to catch on a fly. A tailing carp on a muddy flat will take your lunch money more often than not. Catching what are essentially tame, fed fish is the exact opposite of that. It's the difference between Greco-Roman wrestling in the Olympics and a WWF freakshow. One is the real deal and the other a farce.

So please, 3 Rivers folks, please ban marina fishing next year. You have a seriously good thing here. A Marina Cup Champion is embarrassing. Or should be.