More cats on the flats. 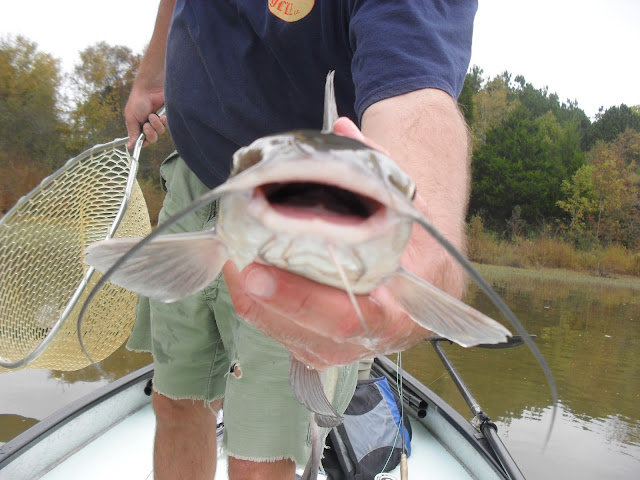 Some sort of shift has occurred at City and I'm not sure what to make of it.  Catfish have been showing up in increasingly large numbers on my usual carp flats. I've seen them there sporadically over the years and have even remarked in previous posts that I was seeing more and more of them, but 2015 has been notable. On several trips I've seen more catfish than carp. It has reached the point that I now find myself looking for them. I recently spent an entire afternoon ignoring the tailing carp and focusing exclusively on cats.
They're fun, these fish.  And difficult. More difficult than common carp even. Harder to approach and far more likely to spook the instant the fly hits the water.  They remind me a lot of grass carp as far as that goes, but they may be even more neurotic than the grassies. Cats are extremely intolerant of anything dropping into the water in their immediate vicinity.
But here's the thing - if the catfish does tolerate the sudden intrusion of the fly and decides he wants to eat it, you dang near can't keep him off of it.  Strip it away at warp-speed he'll chase it all the way to the boat and come out of the water to get it.  If you set too early and pull the fly away from him, he'll swim in circles looking for it.  Just drop the fly back on him and he'll destroy it, guaranteed.
Not sure what I'm going to do if this change is permanent and I now have ready access to tailing catfish. Start a catfish blog I guess. 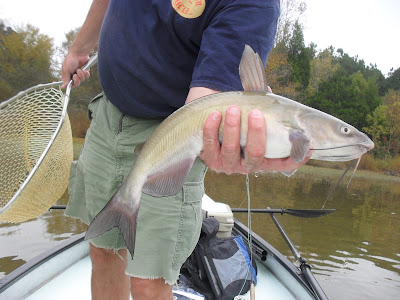